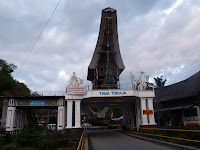 The second portion of our Sulawesi trip involved a fascinating combination of cultural experiences. We flew 1 ½ hours to Makassar in South Sulawesi where we met our guide and boarded a small mini-van for an 8 hour drive to Toraja.
I first learned about Torajan culture in a comparative religion class I took in the early 80’s. We were studying animist religions and theirs was one of the main cultures featured. Though their culture has changed over the years, they still maintain some traditional practices. One is the elaborate funeral ceremonies that last for up to a week and involve animal sacrifice. Family and friends offer pigs and water buffalo to the deceased. The water buffalo has a significant role in the ceremony. It is the animal that must be sacrificed in order to provide transport of the departed soul from this world to the next. By providing this donation for the deceased, he may assist in facilitating blessings on family and friends as an ancestral deity. The social status of the dead dictates how many buffalo will need to be sacrificed. The higher the status, the greater the number of buffalo needed. Hundreds of people attend the multi-day death celebration. There is recounting of the ancestral history and that of the departed. There is song, dance, gift exchange, feasting and communion amongst the guests.
Outsiders are welcome to attend the ceremonies and as luck would have it, there just happened to be one during the time we planned to visit. Most funeral ceremonies are held during the months of July, August and September. When a person dies they are considered to be sick and not buried until the official ceremony. Do to the great expense involved to perform the ceremony; it may be several years before enough donations are received and the body is buried. In the meantime it is kept in the family home. 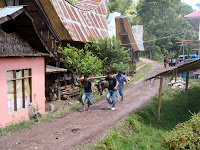 There is of course much more to know about their culture and religion, too much to expound upon within the contents of a blog. So, I will share with you a sampling of our brief encounter with this amazing culture. On our first morning in Rantepao, Toraja we found ourselves trudging up a dirt road along with many others to the site of a funeral ceremony. There were men toting squealing pig offerings and in the background the voice of the master of ceremony booming over a loud speaker.

The site was a large arena surrounded by small bamboo viewing booths that were decorated with bright red, yellow and black banners in traditional design. Inside the arena there were hundreds of people of all ages, several buffalo off to one side and small clusters of pigs scattered about. In front of the booths was a large tower that held the dead mans bright red coffin. Below it was the master of ceremony and a man with a large gong.

Our guide led us over to a front row viewing booth, which we purchased with the recommended donation of a carton of cigarettes. After being seated we were served tea and cookies as the first buffalo was led to the center of the arena. There were periodic processions of people dressed in red, black and yellow traditional clothing. The women in yellow carried tea and other food items to the family’s booth while those dressed in red either led the processions or greeted people at the family booth.

Soon a young man in black, wielding a long ceremonial knife approached the buffalo. Normally the cutting of animal’s throat and its subsequent demise from profuse blood loss is a rapid process, however this one was prolonged – I suspect from the young man’s hesitant technique. It was heart wrenching to witness. Luckily an older man took over and finished the job. We were told by our guide that this was a bad sign, which meant that someone in the audience was not allowing the soul of the deceased to pass on to the next realm.

Fortunately the second buffalo died swiftly with no apparent suffering. This ritual was difficult to witness as an outsider with drastically different culture and severely limited knowledge of the meaning of the event. Still – it is a rare opportunity these days to witness even a small piece of an ancient tradition that remains.

The rest of our time in Toraja was spent visiting various ancient burial sites. The bodies have been buried inside the cliffs or are hanging in old wooden coffins on the side of the cliff. Rows of wooden effigies line the outside of the cliff. There are also burial sites inside caves and one in which babies are buried in little compartments inside of a tree 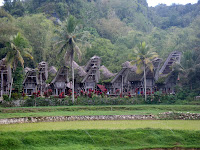 In addition to visiting burial sites, we also saw traditional villages with elaborately decorated Tonkonan (traditional style house). They stand on stilts, have boat shaped roofs, and symbolic carvings, and paintings on the sides. They are also adorned with rows of buffalo jaws and horns.

We had a mere glimpse of cultural event that involves much more than animal sacrifice. To get a deeper understanding of this ritual it would be beneficial to take part in it over several days. To witness the entire event one would need to arrive on the weekend and plan on staying a week. It is possible to find out when these ceremonies will be held prior to your trip. 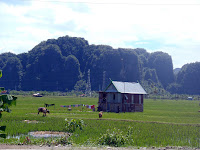 After 4 days we left the mountainous region of Toraja and descended into fields of bright green rice patties. We learned and saw so much in such a short amount of time, yet I feel as if we barely scratched the surface. Sulawesi is a land that is rich in culture, and natural resources - its people and their warmth radiate its beauty.
Posted by Vagabond Ventures at 10:12 PM No comments: