During our recent group trip to Fiji, we stayed at a picturesque tropical resort set amongst towering palm trees and surrounded by lush vegetation. The place is called Beqa Lagoon Resort. It is located on the tiny island of Beqa, just off the Southern coast of Viti Levu. After landing in Nadi, we took a 1 ½ hour bus ride to the town of Pacific Harbor where we boarded a boat for a 45 minute ride to Beqa Island.


On our arrival, we were greeted by resort staff singing a welcoming song in Fijian. We were then escorted to our bures (Fijian term for bungalows). The bure locations are beachfront, garden area and around a Koi pond. All of the bures are nicely appointed, each with its own unique charm. 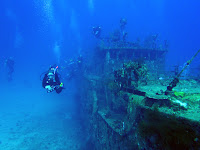 During our week long stay we did 2-3 dives per day and a few of us did an additional night dive. The water was 80-82 degrees with about 50-80 feet of visibility. We dove on a well preserved wreck, an 80 foot Chinese trawler at a depth of 100 feet. It had some easy swim-throughs and colorful soft corals growing on its body. We also swam through a variety of tunnels lined with sea fans and soft corals on several different dive sites. On other sites we cruised over hard and soft corals littered with colorful orange and purple Anthias.

Our grand finally was the Beqa Lagoon Shark Dive. There were 38 divers (normally 52) who signed up for 2 dives. The dives were at different depths in the same area. We began the dives hanging on a line at the surface, peering into the depths below. Surrounding us were juvenile Batfish, and free swimming Remoras, the big boys were waiting below. 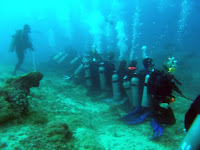 Upon receiving the signal from our divemaster, we all descended in mass to yet another line that was strung across an area just behind the feeding platform. All the bubble blowing spectators were positioned along the line. Looking out over the cement platforms, there were several nurse and lemon sharks swimming lazily by, as well as a variety of large game fish like the Giant Trevally swimming above the platform in a slow semi-circular fashion.
As the food bucket was lowered into the feeding area, the pace of action quickened. The semi-circle became a tight cyclone that enveloped the bucket and the feeder. When the lid was lifted, the water became murky with the fish stew and the cyclone’s intensity reached a crescendo. Large bulky shapes began emerging from the twister. The bull sharks had arrived. The feeder appeared from the frenzied mass and began hand feeding the bull sharks as they swam by. Meanwhile a group of nurse sharks lay at the base of the bucket sucking up the juice. There was so much going on all at once that it was hard to know what to focus on. What wasn’t difficult to focus on was the occasional bull shark that would swim straight at me only to veer off at the last second as I shrunk below the coral ledge. The event was fast and furious and then it was over, but what a great opportunity to witness a variety of big fish and sharks up close.
Our main focus for the week was diving, but we also got a chance to experience several other noteworthy events that enhanced our experience of the friendly culture in Fiji, one of these events was the Kava Ceremony. In order to give their guests a taste of the local culture, Beqa Lagoon Resort offers a weekly kava ceremony. Organizing our tasting experience was a cheerful local named Tuamo, who had a wildly infectious laugh that was slightly reminiscent of Woody the Woodpecker. 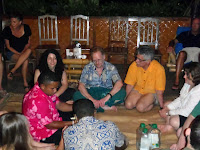 A large woven mat was spread out in a section of the dining area. Tuamo summoned all who dared to take part in the ceremony to sit cross-legged in a circle around the mat. Selected from the group was one to act as the chief, known as “Ratu” and one to be his spokesperson. Once the ceremony had begun no one was allowed to leave the circle without asking permission from the chief through his spokesperson, as direct communication was forbidden. The ground Kava root was brought to the mat in bags that were emptied into a large wooden bowl and mixed with water. 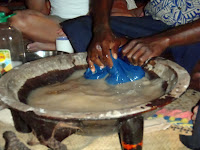 The ritual involves communal drinking of the Kava mixture from a half coconut shell that is filled from the large wooden bowl and served to each member one at a time. The chief initiates the process. Upon receiving the cup, one must clap, drink it down, clap again then hand it back to the server to be passed to the next member.

The flavor of the muddy looking liquid is earthy, bitter and numbs the tongue. It is clearly an acquired taste. It is often described as a mildly narcotic substance, but after consuming 3 full cups, the only effect that we noticed was a numb tongue. I got the feeling that one would probably get sick to their stomach before they could drink enough to actually get a buzz.
Another optional afternoon activity that the resort offered was a hike to a nearby waterfall. Friendly Tuamo was our guide for this activity as well. As luck would have it, the weather that had been mostly sunny during our stay turned to intermittent showers that day and during our mostly uphill hike to a somewhat less than impressive waterfall, it decided to pour. Looking on the bright side, the rain did make what might have been a hot sweaty event more refreshing. The hike itself provided an opportunity to see some of the landscape outside of the resort and learn something about the local flora. One little tidbit we learned was about a vine that grew along the trail called the “Mile a Minute Vine.” Tuamo informed us that this vine had coagulation properties and was used by the locals to stop bleeding. 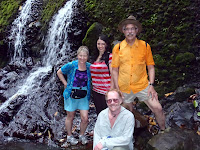 Drenched and muddy, we arrived back at the resort just in time to witness the legendary “Firewalkers.” Indigenous fire-walking was originally practiced only on the island of Beqa and was a significant religious event that involved the entire community. The fire-walkers were required to abstain from having sex and eating coconut for 1 month prior to their walk across the searing coals.

The preparation for the event at Beqa Lagoon Resort began in the morning with building a huge bonfire. By the time we arrived late in the afternoon, the fire had died down to a small flame and the coals were being prepared for the final event. During the preparation there was periodic chanting amongst the fire-walkers. Once the coals were ready, each member dressed in warrior garb, made their way across the hot stones, one at a time, pausing briefly in the middle for effect. Though the event has clearly switched from a spiritual practice to a commercial one, it was still a unique representation of a different culture.

There is an opportunity provided by the resort to meet the actual chief of a nearby village, unfortunately we missed the scheduled event due to our shark dive. We did take a guided walk to the village and were shown the chiefs house. There we met his son you who officially welcomed us to the village and apologized for his father’s absence. It is customary to bring a gift when you visit the chief, so we brought… what else… Kava!
It turns out that we actually did meet the chief on the path to the village but just didn’t know it. He was just a guy carrying a machete, walking with his wife who was also carrying a machete. Who knew!
Last but surely not least, the resort has a spa on the property where I was treated to the best massage I have had in a long time. It was 70 minutes of pure bliss! The treatment I received was “The Signature Massage,” and is a combination of Lomi Lomi and deep tissue techniques. Oooh la la, no tired diving muscles after that!
On our departure we were again serenaded by the resort staff who gave us Hibiscus flowers that we were to cast into the sea as we floated away indicating that we would return one day.

Posted by Vagabond Ventures at 10:14 PM No comments: